Western Animation / Spartakus and the Sun Beneath the Sea 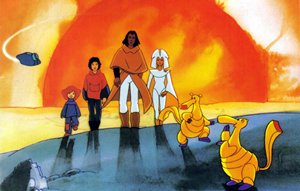 Spartakus and the Sun Beneath the Sea is the title of the English language version of the French animated series Les Mondes Engloutis ("The Engulfed Worlds"), best known by American viewers as that trippy little series that ran on Nickelodeon for two years (1985-1987, rerun until 1990). You know, the one with the opening theme song sung by Menudo in Season 2.

The series concerns a lost city named Arkadia, whose ancient civilization escaped a great cataclysm by moving underground into the Hollow Earth. Today, most Arkadians don't even know that life continues on the surface (thanks to the machinations of the ancients), but life goes on, thanks to the heat and light of Arcadia's artificial sun, Tehra (Shagma in the French version). Unfortunately, Tehra is starting to lose power and fail, but the adults of Arkadia seem complacent that everything will be fine, despite a vocal group of children calling for the city to do something to prevent both the sun and the city dying.

Given no other choice, the children enter a forbidden archive, and discover the truth about the existence of life on the surface. Using the knowledge in the archive, they create a messenger named Arkana, and send her to the surface world for help. Together with the two talking pangolins Bic and Bac, she makes it to the surface in Tehrig, and finds two ordinary human children, Matt (Bob in the original) and Rebecca, willing to go back with her. Unfortunately, Tehrig (Shagshag in the original) is captured by the Pirates of the Seas before reaching the portal back. They are eventually freed with the help of the wandering warrior Spartakus, but by then they are hopelessly lost, and have to wander the various worlds beneath the sea to find a way to Arkadia before it's too late.