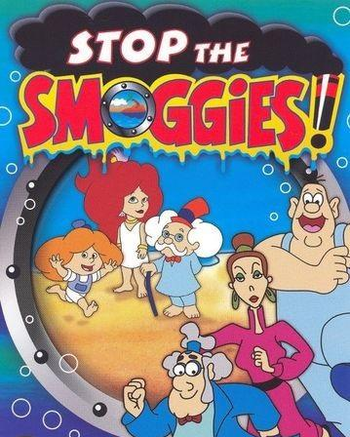 The Smoggies, known as Stop the Smoggies in the US, is a Canadian cartoon produced by Canada's Global Television Network and CINAR. The Smoggies, consisting of the vain, bossy Emma, the brilliant, henpecked Clarence, and the musclebound, childlike Polluto, are a trio of treasure hunters with no regards for the environment. They arrive at the beautiful Coral Island in pursuit of a magical coral that Emma believes will grant her everlasting youth. In fact, said coral doesn't exist, but she refuses to accept this fact.

The unwitting destruction that the Smoggies carry out is countered by the efforts of the Suntots, a race of seemingly eternally young, child-like people who have invented many brilliant, ecologically sustainable gadgets and gizmos that take advantage of the plentiful water, wind and solar power their home provides. They wish the Smoggies would leave Coral Island, but are too peaceful to use violence to drive them away. The Smoggies aired on the Global Television Network until August 1997.