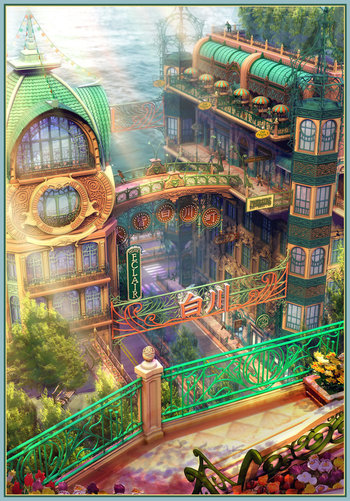 Green cities and gorgeous design? Yeah. The future is gonna be awesome. Drawing by Owen C

"We use the water, wind and sun
To make our homes and gadgets run
Where else can you have such fun, environmentally?!"
— The Smoggies theme song
Advertisement:

Solarpunk is a genre of Speculative Fiction that focuses on craftsmanship, community, and technology powered by renewable energy, wrapped up in a coating of Art Nouveau blended with African and Asian aesthetics. It envisions a free and egalitarian world with a slight bend toward social anarchism. Standing as both a reaction to the nihilism of Cyberpunk and a solution to a lot of the problems we face in the world, Solar punk works look toward a brighter future ("solar") while deliberately subverting the systems that keep that brighter future from happening ("punk").

Other aspects of Solarpunk include a quasi-Utopian setting, usually 20 Minutes into the Future, with the occasional Crystal Spires and Togas and even sometimes Beast Men (Biologically/genetically engineered or not) to add weirdness or other unwanted proposed elements. Like the Tumblr community that fostered the genre, Solarpunk also tends to feature a high level of cultural awareness, gender equality, self-expression, and artfulness. Likely to combine lighter and more utopic versions of Biopunk, Oceanpunk and Skypunk themes, randomly set in the near/far future (rarely in the far past), with realistic (sci-)fantastic elements. Solarpunk works usually believe in Science Is Good, as the marriage of nature and technology is what leads to such a utopic setting.

Compare and contrast with Post-Cyberpunk, which saw the Cyberpunk movement and came to different conclusions. Post-Cyberpunk accepts the world we have and the systems that support it like corporate globalization, industrialization, and exploiting resources in slightly-less-bad ways. Meanwhile, Solar Punk aims to subvert those systems and replace them with ones that work better in the long-term through local communities, supporting artisans, and living sustainably.

Like any budding genre, the number of works is still low; it's already been remarked that there's a lot more sci-fi classics retroactively labeled as Solar Punk than those which were consciously written to follow the trend. As far as we here at TVT are concerned, it's enough for the moment if they contain important Solar Punk elements. Let us leave genre distinction debates to others and feel free to add examples for either of these.

A helpful intro to the whole concept can be found here

Compare to Pastoral Science Fiction. In some ways Solarpunk has looped back to a version of the Crystal Spires and Togas that Cyberpunk was originally rebelling against in the first place.