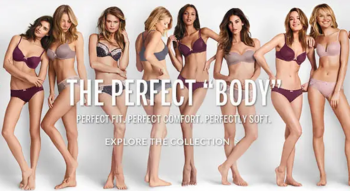 The opposite of Hollywood Pudgy. Basically, the media's tendency to present women far skinnier than the average person as attractive, healthy and average/normal.
Advertisement:

If you were to take these people and compare them with a random selection of people, it would become obvious that many of them are much thinner than average. Often they will have an extremely small waist, very shallow ribcage, weak hips, and extremely narrow shoulders that very few women in the real world can possess.

Women considered "fit" enough to be shown on TV generally fall into the fifth percentile when it comes to shoulder width and rib cage depth. These are hereditary traits that no woman can actually control and that have nothing to do with actual physical fitness. Yet these women are the ones who Hollywood shows as "average", especially if they have unrealistically enormous breasts (that are almost definitely implants) hanging just above that extremely narrow waist.

For men the opposite holds true. Any male who isn't sporting a six-pack, ripped pecs, or biceps as thick as oak trunks is often portrayed as, or is implied to be, scrawny and weak, even if the character is supposed to be fourteen years old. (The opposite may be true in cultures that favor the Bishounen archetype for male beauty.) Again, if you were to take these guys and compare them with a random selection of men in the real world, their bodies would not be seen as very average-looking.

Ditto in animation, video games, and a great many comics, doubly so because they aren't required to find living people who have the desired looks. In fact, being unconstrained by human physiology allows non-live-action media to exaggerate features; see also Noodle People, Most Common Superpower and Heroic Build.

This is quite possibly a side effect of the entertainment industry's tendency to cast, and then depict, an entire slate of attractive people, except for when the plot demands otherwise.