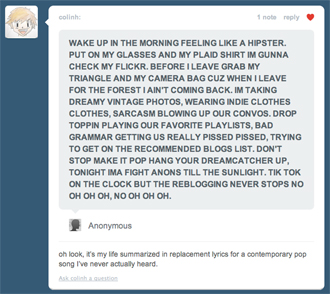 Tumblr is a "short-form" multimedia blogging platform. A favored stomping ground of college-age (and younger) amateur photographers, graphic artists, fandom bloggers, social justice bloggers, and people who just felt like making one. It's far less text-rich than other blogging sites. Users tend to collate pretty images and memes from around the internet on their tumblogs, with most memes also being popular on 4chan and Reddit at the same time. They can also follow one another and reblog or like one another's posts, a system that encourages popularity contests. Themed tumblogs abound, from Fuck Yeah, Dioramas!

to The Right Writing

. We also have a tumblr

Differing from other mainstream social media sites, rather than personal profiles for networking, its populace is made up largely of a variety of fandoms and artists, while having been noteworthy for every variety of hatedom imaginable and acquiring a reputation among Hipster bloggers in its earlier years. It's also known for its tacit encouragement of designers. Tumblr's interface makes it easy to set up a portfolio, and its support staff has been praised for running its Theme Garden, which features often minimalist layouts designed by users.

Their fandom base is very widespread, ranging from Harry Potter to Welcome to Night Vale. Any movie or show with a large slash following have fairly large fanbases. Like most places on the internet, Shipping is also a big deal.

In 2017, Verizon bought out Yahoo and placed ownership of Tumblr under their "The Oath" branding. On December 3rd 2018, after the Tumblr app was removed from the iOS store for allegedly allowing users to access child pornography, The Oath announced that all adult content was to be banned. The ban was enacted on December 17th 2018.