Do You Want to Copulate? 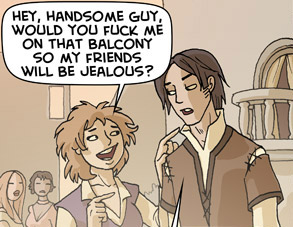 She's not one to mince words.
"I don't exactly know what I am required to say in order for you to have intercourse with me. But could we assume that I said all that. I mean essentially we are talking about fluid exchange right? So could we go just straight to the sex."
— John Nash (before getting slapped in the face), A Beautiful Mind

A sub-trope of What Is This Thing You Call "Love"?, this refers to the examples where the character is completely devoid of any hang-ups and inhibitions humans usually feel in connection with sex. This might be because they are aliens, or have No Social Skills due to an offbeat background, or live in some sort of utopian/dystopian universe. Or it might be because they just don't have hang-ups. Whatever the reasons, they have no qualms about taking their clothes off in the presence of other people, and may pose a question along the lines of the trope title to anyone who they suspect of being attracted to them.

Related tropes: Good Bad Girl, Shameless Fanservice Girl, and Hooker with a Heart of Gold. As these related tropes and the examples below suggest, trope examples are usually female: as men are seen as more sexually threatening than women, a man who behaves in this manner is more likely to be seen as creepy and menacing than sexy or amusing. Intercourse with You sounds like this trope but is about the ubiquity of sex in media.

Compare Have I Mentioned I Am Sexually Active Today?. Contrasts Accidental Innuendo.

open/close all folders
Anime and Manga
Our bodies are about to become one. I'm going to conceive your child!
Comic Books
Fan Works

Alternative Title(s): You Me Sex