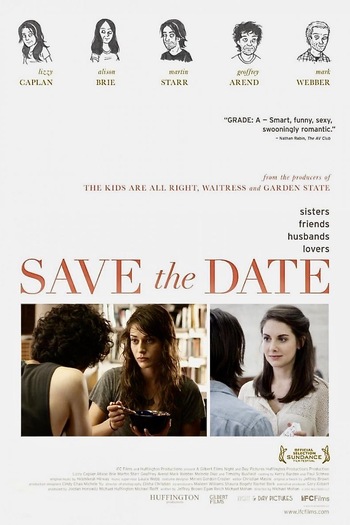 Sarah (Caplan) and Beth (Brie) are sisters who have a fractious relationship. Sarah, an artist, is dating Kevin (Arend), who sings in a bad, while Beth is busy making wedding plans with Kevin's bandmate Andrew (Starr). Sarah agrees to move in with Kevin, but is still quite ambivalent about making their relationship more serious, and when he proposes publicly, she breaks up with him. Sarah then gets involved with Jonathan (Webber), a man with a crush on her whom she meets in the bookstore where she works. Meanwhile, Beth becomes increasingly obsessed with her upcoming wedding, causing friction with both Andrew and Sarah. When complications arise from Sarah and Jonathan's relationship, things become far more difficult.

Alternative Title(s): Save The Date