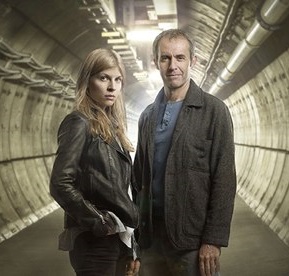 Venez dans mes bras
Closer to me, dear
Donnez-vous à moi
Set aside all fear
Restons enlacés, pour l'éternité
Yes, you shall be mine,
'til the end of time.

— "The End of Time," Charlotte Gainsbourg, sung to the tune of A Maiden's Prayer
Advertisement:

The Tunnel is the 2013 French/English remake of the Swedish/Danish Nordic Noir series Bron|Broen, and not to be confused with the American/Mexican remake known as The Bridge. Though it closely follows the plot of the original, a key difference (as the title would suggest) is that a body is found in the Eurotunnel rather than on a bridge, right on the border between France and England.

It follows the investigation of British police DCI Karl Roebuck (Stephen Dillane) and French Brigade Criminelle Captain Elise Wasserman (Clémence Poésy), who are forced to work together due to the location of the body. The task is given an extra twist when they realize that there are actually two bodies: the head and torso of a French politician and the lower half of a Welsh prostitute.

The investigation soon turns into a hunt for a terrorist (nicknamed the Truth Terrorist, or TT) who is leaving strange messages on social media sites, claiming that everything he does is to draw attention to social problems in both countries.