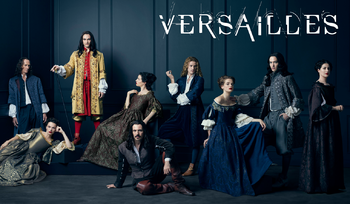 Versailles is a Franco-Canadian television show about the life of King of France Louis XIV from the year 1667 onward. Although it was primarily made by French television network Canal+ (with Canada's Incendo as a minority partner), it was shot entirely in English so that it could have wider international distribution, and it is the most expensive French television series to date due to it being filmed on location at the Château de Versailles. The first season was aired in France on November 2015 through Canal+ and on Super Channel in Canada, on May 2016 in the UK through BBC 2, and on November 2016 in the United States through Ovation TV. The second season premiered in France in March 2017, and the third and final season was broadcast in April 2018. Since December 2016, the complete first season is available on Netflix and since 2018, the second season as well.

The royal court is in Paris, but Louis the 14th goes to his hunting lodge, and then refuses to go home. He has a dream of making Versailles into the royal court, the pride of France. Everyone tells him that's crazy, it will never work. He says he's the king and Screw the Rules, I Make Them!. So he brings his whole Court Full of Long Haired Pretty Boys and the Mistresses to Versailles and sets up the Decadent Court there.

Even when the inspiration is the same, this series is not to be confused with The Rose of Versailles nor the Visual Kei group Versailles. Following the end of the series, Canal+ ordered a Spiritual Successor also set in Versailles about one century later, Marie Antoinette.