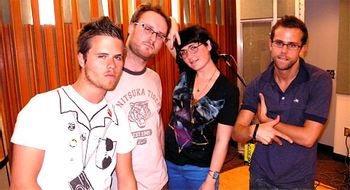 M83 are a French electronic/Shoegazing band. The main band member is Anthony Gonzalez (composer), and joining him live are Morgan Kibby (who has written and performed on the past two albums), Loïc Maurin (drums), and Jordan Lawlor.

Their career started in 2001 with a Self-Titled Album that received little attention or praise. They released their second album Dead Cities, Red Seas & Lost Ghosts in 2003: critically praised but commercially ignored for its first year. Then the indie scene picked it up and they gained some popularity. By 2005's Before The Dawn Heals Us, they had gained a fanbase and critics were drooling in anticipation over the album's release. Though not as critically praised as Dead Cities, it got very positive attention. Then Saturdays=Youth was released in 2008, once again getting them good sales and positive critical attention. The band's next album, Hurry Up, We're Dreaming, was issued in 2011 to massive acclaim and its first single, "Midnight City

" was named the best song of the year by Pitchfork Media (and in 2012, the song became rather popular on alternative rock radio).

Indie kids love this band. It's very easy to spot why: M83 loves to use experimental sound effects to add to the artistic quality of their albums. Lots of people who aren't indie kids also love this band for the same reasons. Much like how another popular French electronic group was chosen to score TRON: Legacy, they were chosen by director Joseph Kosinski to score Oblivion (2013).

Anthony's brother, Yann Gonzalez, is also a film director. He directed two films, You and the Night in 2013 and Knife+Heart in 2018. M83 provides the original soundtrack for those films.