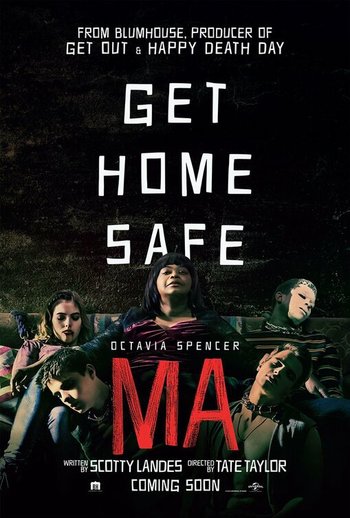 "This is the most fun I’ve had in a long time!"
Maggie: There's something off about Ma.
Andy: Seriously? She's harmless. And her basement's pretty much the best drinking spot in town.
Advertisement:

Ma is a 2019 psychological horror film written and directed by Tate Taylor and distributed by Blumhouse Productions.

The film involves the titular "Ma," Sue Ann Ellington (Octavia Spencer), being convinced by a group of adolescents to buy them alcohol. She offers them the opportunity of drinking in her basement, but she also lays down several house rules: one of them has to stay sober, they can't go upstairs, they aren't allowed to curse, and they must always refer to her as "Ma". Naturally, the film takes a drastic turn when Ma begins to express more sinister intentions.

"What you did to me, it never goes away."