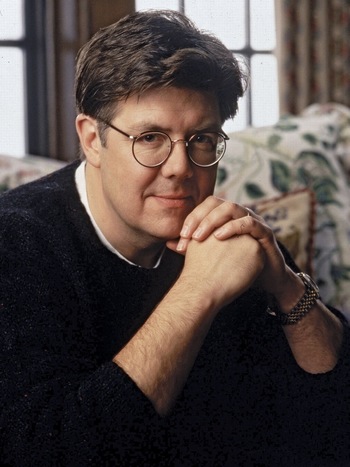 "It is thanks to him that not a day goes by when someone, somewhere does not come up to me, taps me on the shoulder and says, 'Hey, Ferris, is this your day off?'"
— Matthew Broderick, Memorial Speech for Hughes at the 82nd Academy Awards
Advertisement:

John Wilden Hughes Jr. (February 18, 1950 – August 6, 2009) was an American filmmaker best known for the teen comedies he wrote and directed in the mid 1980s: Sixteen Candles, The Breakfast Club, Weird Science, and Ferris Bueller's Day Off.

Hughes grew up in Grosse Pointe, Michigan and then Northbrook, Illinois. He dropped out of the University of Arizona, then worked as an advertising copywriter before getting a job as a contributor for National Lampoon magazine. He was also one of the key developers of Delta House, the TV spinoff of Animal House. His first big successes as a screenwriter were National Lampoon's Vacation and Mr. Mom. (He got a rare shared screenplay (and sole story) credit for National Lampoon's European Vacation when his script was rewritten by Robert Klane.) After Ferris Bueller, he directed Planes, Trains and Automobiles, She's Having a Baby, Uncle Buck, and Curly Sue, and wrote and produced Pretty in Pink, Some Kind of Wonderful, National Lampoon's Christmas Vacation, and the first three Home Alone movies. (He also produced Only the Lonely for Home Alone director Chris Columbus, one of only two films he produced that he didn't write; the other was New Port South, written and directed by his son James.)

During the 1990s, he somehow ended up writing and producing a string of more family-oriented comedies, including the live-action versions of 101 Dalmatians and Dennis the Menace, and the remake of Miracle on 34th Street. Experiencing a severe case of Artist Disillusionment after the death of his friend, actor John Candy, in 1994, he would become a recluse, and the rest of his screenplays would be written under the pseudonym Edmond Dantes (also used for 1992's Beethoven). His last film was the 2008 comedy Drillbit Taylor. He died of a sudden heart attack in 2009 from living under stress and isolation. Good Friend, Vince Vaughn said shortly after his death in Variety that Hughes likely would have made more films as a director if Candy had lived longer.

The Breakfast Club and Ferris Bueller's Day Off were both later posthumously inducted into the National Film Registry by the Library of Congress.

His films (those few that don't already have pages of their own) provide examples of: