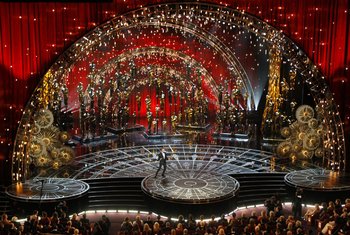 It's Hollywood's biggest night.
"As you well know by now, this is the fifty-first annual Academy Awards. Two hours of sparkling entertainment, spread out over a four-hour show."
— Johnny Carson, opening the 1979 ceremony
Advertisement:

The mother of all Award Shows, the annual Academy Awards ceremony (also known as simply The Oscars) is typically considered a major entertainment event in its own right.

In addition to (of course) the presentation of the eponymous awards themselves, the ceremony typically features a mix of comedy bits, musical numbers (including, traditionally, performances of the nominees for Best Original Song), and other feature segments (including since 1993, an "in memoriam" segment featuring a montage of notable figures in film who had died during the past year). The ceremony is known for being Carried by the Host, often relying on an actor or personality with a comedy background: Billy Crystal and Bob Hope have been well-known hosts in the past, with Hope in particular having hosted a record 19 times. The ceremony's producers have experimented with other hosting arrangements as well, such as having multiple hosts in a group, or having presenters rotated throughout rather than one or more definitive hosts.

The ceremony was first televised by NBC for the 25th Academy Awards in 1953. Since 1960 (barring a brief return to NBC from 1971 to 1975), the ceremony has been consistently broadcast by ABC, under a contract recently renewed through 2028. The ceremony has had a history of high viewership, especially if a highly-regarded film was in the running for Best Picture (such as Titanic, which caused the 1998 ceremony to have just over 57 million viewers), although ratings have steadily dropped since the Turn of the Millennium due to multiple factors, such as changing viewing habits and the reception of recent ceremonies (with the most recent ceremony in 2020 falling to an all-time low of 23.6 million — a 20% year-over-year drop over the 2019 ceremony, which itself had a 12% gain over 2018). The 2021 ceremony was delayed all the way to April 25, 2021 due to the COVID-19 Pandemic and its impact on the film industry — which also caused the ceremony to carry a different look and feel (trading the Dolby Theatre for a Retraux banquet at the historic ticket hall of Union Station in Los Angeles), and achieved the dubious honor of being the least-watched Academy Awards in recorded history—with only 10.4 million viewers. The ceremony returned to the Dolby Theatre in 2022, with an improvement in viewership but still the second-lowest overall.

Until The New '10s, the Oscars were, notably, one of the few non-sports primetime programs to be broadcast live nationwide, rather than tape-delayed for the West Coast. However, most of the other major awards shows began to follow suit with the popularity of social media, which demanded a more "communal" experience, and made it harder to avoid "spoilers".

And the Oscar Goes to…