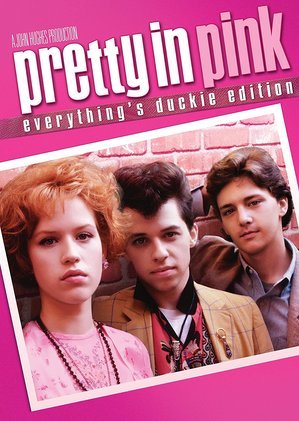 Molly Ringwald stars as Andie Walsh, a teenager with a crush on an upper-class boy, Blaine McDonough (Andrew McCarthy). When he turns out to reciprocate her feelings and they pursue a relationship, their respective social circles show some resistance.

Andie lives on the Wrong Side of the Tracks with her unemployed, divorced father (played by Harry Dean Stanton), for whom she cares almost as a mother would. Her best friend Duckie (Jon Cryer) is in love with her, but plays it off as a joke to maintain their friendship. The two of them are harrassed by the "richie" kids, Steff (James Spader), and Benny (Kate Vernon). Andie works for her older friend Iona (Annie Potts) at TRAX, a New Wave music store in Chinatown. Iona urges her to go to the prom.

One of the Brat Pack movies. Hughes and Deutch would collaborate again the following year on Some Kind of Wonderful, which is in many ways a Gender Flipped version of the same story.