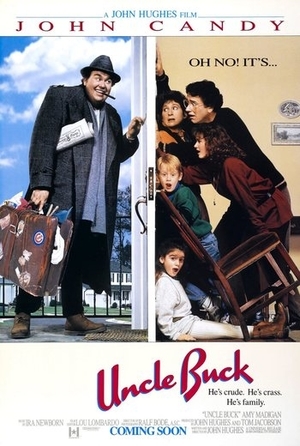 Who knew John Candy could be so terrifying?
"How would you like to spend the next several nights wondering if your crazy, out-of-work, bum uncle will shave your head while you sleep?"
Advertisement:

What do you get when you have a family emergency, and the only person available to watch the kids is John Candy? You get Uncle Buck.

The title character in this 1989 John Hughes picture is Buck Russell, a fun-loving, unemployed slob with Commitment Issues. When his sister-in-law's father has a heart attack, he is called on to watch his brother's children, including teenage Deadpan Snarker Tia. Hilarity Ensues.

Much of said hilarity comes from Buck's repeated encounters with Tia's boyfriend, Bug. Buck knows Bug is just using her, and pretends to be Ax-Crazy for Bug's benefit. Tia decides that This Means War! When not trying to save Tia from herself, Buck cooks giant pancakes, punches out drunken clowns, and tries to come to terms with working for his girlfriend Chanice. All this builds to a Crowning Moment Of Heartwarming in which Buck must choose between freedom and responsibility. Macaulay Culkin's performance as Tia's little brother will remind many viewers of Home Alone, and for good reason: it inspired the movie.

Spawned a sequel TV sitcom that premiered in September 1990 on CBS, starring Kevin Meaney as Buck, who becomes guardian of the three children after their parents are killed in a car accident. Panned by critics, it didn't even finish its first season before being cancelled, after airing only 16 of 22 filmed episodes. A second TV sitcom premiered in 2016 on ABC, this time with an all-black cast in an attempt to ride the coattails of black•ish. This version was also panned by critics and only lasted 8 episodes.