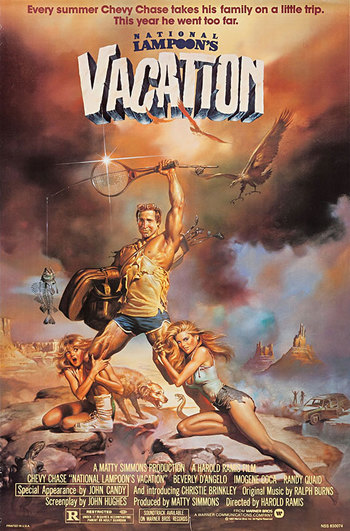 "This is no longer a vacation, it's a quest. It's a quest for fun. I'm gonna have fun, and you're gonna have fun, we're all gonna have so much fucking fun we'll need plastic surgery to remove our goddamn smiles!"
—Clark W. Griswold
Advertisement:

The screenplay was written by John Hughes, based on his short story in National Lampoon magazine, "Vacation '58" (the screenplay changes the year to 1983). The original story is (reportedly) a fictionalized account of his own family's ill-fated trip to Disneyland (changed to "Walley World" for the film) when Hughes was a boy. The success of the movie helped launch his screenwriting career.

A series of sequels followed:

There was also a 2003 Made-for-TV Movie, Christmas Vacation 2: Cousin Eddie's Island Adventure, which focuses on Randy Quaid's character and his family, and a 2010 Reunion Show, Hotel Hell Vacation

wherein Clark and Ellen stay at a hotel that doesn't go in their favor. A "Walley World Water Park" opened in Canada several years after the release of the movie.
Advertisement:

After Christie takes off all her clothes, she says that it's great to be naked.

After Christie takes off all her clothes, she says that it's great to be naked.