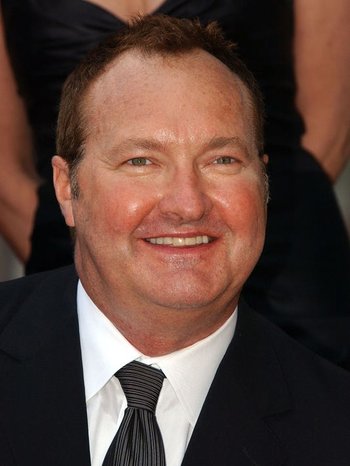 Randall Rudy Quaid (born October 1, 1950 in Houston, Texas) is an American actor, who first gained traction in the 1970s as a character actor. He first got widespread attention playing the ill-fated Navy sailor Meadows in The Last Detail, which earned him an Academy Award nomination for Best Supporting Actor. Throughout his career, he's dabbled in more dramatic work such as Midnight Express and Independence Day and comedic films such as National Lampoon's Vacation.

Quaid was actually a cast member on the long-running American sketch show Saturday Night Live during the 1985-1986 season (when Lorne Michaels returned to run his show after the failure of The New Show and nearly got SNL canceled due to the cast he hired and the writers who couldn't make Lorne's new cast funny). Presumably, Quaid was hired because Jim Carrey passed up the chance to be on SNL after seeing a man threatening to jump off the Studio 8H building and feared that being on the show would drive him to suicide. Like the majority of season 11 cast members, he wasn't hired back for season 12. During his short time, Quaid only had two recurring characters: the floating head narrator for the Twilight Zone-esque show, The Limits of the Imagination, and Rudy Randolph, Jr. (the spokesman for an Honest John's Dealership that sells a lot of shady items, such as Ferdinand Marcos' clothes, stolen Rolls Royces, and flood-damaged furniture. His son, Rudy Randolph III was played by Robert Downey, Jr.). Quaid's celebrity impressions include Ronald Reagan (who didn't look like him, but got the voice right — and was often upstaged by Terry Sweeney's Nancy Reagan), John F. Kennedy, Ed McMahon, Gregory Peck, Lyndon LaRouche, Bob Guccione, and Roy Orbison.

By the late-2000s, Quaid, alongside his wife Evi, would fall into a series of odd behavior, worrying about what he claimed were the "Hollywood Star Whackers", a cabal that supposedly killed celebrities such as Heath Ledger and was fearing they were coming after him. After a series of legal issues, the Quaids moved to Canada in 2010. But after being denied citizenship, they ended up going to Vermont, where they reside today, away from the Hollywood lifestyle.

Actor Dennis Quaid is his younger brother and is the uncle of Dennis's son, Jack Quaid.

Russell makes the ultimate sacrifice to save the planet.

Russell makes the ultimate sacrifice to save the planet.