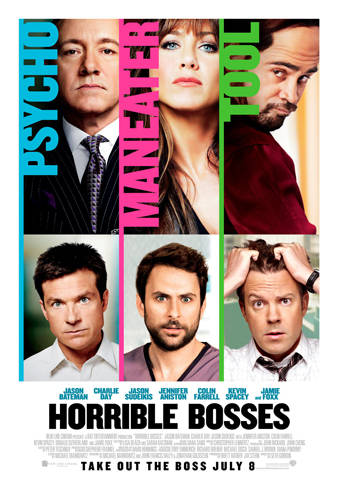 Nick Hendricks (Jason Bateman) has sacrificed everything for his job, and claims that the difference between him and life's failures is that he's willing to take it. He spends six months sucking up to Dave Harken (Kevin Spacey), a typical power-tripping corporate bully, to get promoted—and then he finds out that the position he's trying for will be taken by Harken himself, but at only 85% of the additional salary.

His friend Dale Arbus (Charlie Day) skipped out on the white-collar rat race. Now he's an assistant to Dr. Julia Harris (Jennifer Aniston). She wants to have sex with him, and doesn't care if he consents — or that he's engaged to be married.

Their mutual friend Kurt Buckman (Jason Sudeikis) loves his job, and his boss, Jack Pellitt (Donald Sutherland). That is, until tragedy strikes, and his self-absorbed, lazy son Bobby (Colin Farrell) assumes command of the company and begins to run it into the ground.

One night, Kurt suggests that they kill each other's bosses. He means it as a joke. At first.

Horrible Bosses 2 was released in 2014, and stars Bateman, Day, Sudeikis, Aniston, Foxx, Chris Pine, and Christoph Waltz. In this film, Nick, Dale, and Kurt, tired of working under crappy bosses again, decide to start their own business. However, a father-son pair of con artists pull the rug out from under them, leaving them broke. In order to take their business back, the trio decides to kidnap the investor's son and ransom him back for the money needed to pay off their debts. Hilarity Ensues.

Not to be confused with That One Boss.