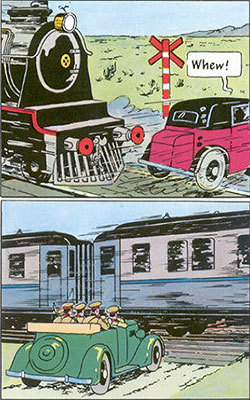 The judicious use of a train (usually) to interrupt a Chase Scene.

During a chase, the quarry can usually get away by darting across a set of tracks just ahead of the train. The pursuer will inevitably get caught by the train, and the quarry makes good his escape.

A common subversion might be that the quarry actually stops on the other side of the tracks to gloat... only to discover that it's a short train that passes by in just a few seconds, allowing the chase to continue.

This can also be applied to street chases, with traffic (usually a semi or other big truck) pulling out from a side street — or, really, any sudden (if temporary) obstacle which obstructs or impedes the pursuer, allowing the quarry a significant head start or outright escape. Typically involves a car chase, but a foot chase will work just as well.

During a foot chase, the quarry will hop onto a train to escape the pursuer. This can involve boarding a ready-to-depart train at the station, with the doors shutting in the pursuer's face; but it usually works best if the quarry has to actually charge down the tracks in order to catch a moving train, and the pursuer is just that one step too far behind and cannot catch up as the train accelerates, taking the quarry with it.

Doesn't work as much today, with most modern trains having a) automatic doors or b) doors that are locked before departure. So nowadays the quarry jumps on top of the train, and sit down gasping while their pursuer is left in the dust. In modern "Wuxia" films, the pursuer will follow, resulting in The Climax — a Traintop Battle. As with Type 1, street traffic (generally a semi truck) can be used instead of an actual train.

Both pursuers and pursued are on a moving train, and the person(s) being chased unhook a part of the train to separate them and escape.

All three variations of this trope often work as a way to artificially extend the plot, as the bad guys get away and the heroes have to go look for them all over again.

Compare Off Bridge, onto Vehicle.

Although it should go without saying, that any attempt to do these in the real world will most likely end with the person being pursued getting killed by the train. A single locomotive weighs hundreds of tons, and the train behind it is often thousands of tons or more. They will not stop on a dime if something appears suddenly in front of it.

Do not, under any circumstancesnote Unless you're trying to escape with your life, and this is your only option., cross an active set of tracks with a train coming. You will most likely not survive the attempt.

With a subversion on the pursuer, no less!

With a subversion on the pursuer, no less!