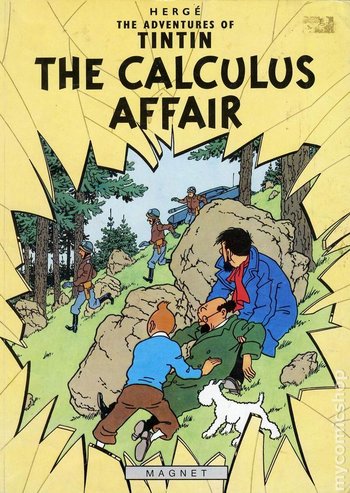 The Calculus Affair (1956) is the 18th adventure of Tintin, mostly set in Switzerland. It is a Cold War tale featuring Spy Versus Spy situations. The tale begins at Marlinspike Hall during a thunderstorm. Tintin and Haddock witness a series of mysterious events. Glass and porcelain items both within the Hall and in its general vicinity shatter for no apparent reason, followed by a series of gunshots right outside the Hall. The two friends fail to find anyone out there, except a wounded man who makes a quick escape.
Advertisement:

The duo have no idea what is going on. Calculus seems undisturbed, leaving the following day for Geneva, where he is to attend a conference on nuclear physics. All strange incidents seem to stop in his absence. It doesn't take long for Tintin to figure out the significance of this fact. The glass was breaking due to the Glass-Shattering Sound of a sonic weapon created by the Professor. Gunfights take place around Calculus because rival teams of spies, sent by the nations of Syldavia and Borduria, are tailing him, attempting to capture him and eliminate their opponents. Tintin and Haddock have to rush to Geneva and try to save their missing friend, but it might already be too late.

The album introduces Jolyon Wagg, an overly-friendly insurance agent, who invites himself into Marlinspike Hall during the thunderstorm and tries to sell insurance to Captain Haddock. He fails but has no intention of actually leaving. He even stays there while the residents are absent and soon invites his family for a joined vacation. The annoying man was based on a salesman who came to Hergé's door and invited himself in. The ever-annoying Wagg would become a recurring character.