Recap / Tintin: Explorers on the Moon 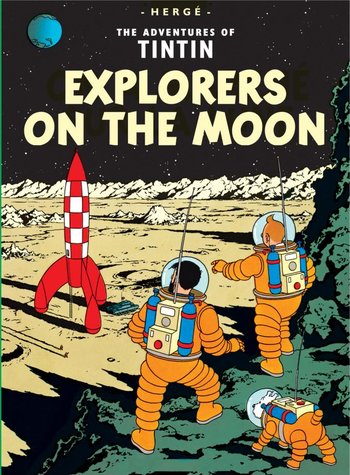 After the events of Destination Moon Tintin, Haddock, Snowy, Professor Calculus and his assistant Frank Wolff are currently en route to the Moon in Calculus' rocket. Shortly into the trip however, a serious predicament arises: Thomson and Thompson are found inside the rocket, having decided to "guard it" and having thought the time of the launch was at 1:34 PM instead of 1:34 AM — the oxygen supply was designed for four people (plus Snowy), not six.
Advertisement:

From that point on, the trip is still plagued with difficulties: the Thompsons accidentally turn off the nuclear motor, leading to microgravity hijinks; Haddock gets drunk on some smuggled whiskey, goes on an impromptu space walk and starts orbiting around an asteroid, forcing Tintin to rescue him and the Thompsons are still suffering occasional relapses of the bizarre condition caused by their ingestion of Formula Fourteen. Despite all this, the rocket successfully lands on the Hipparchus Crater and Tintin becomes the first man to walk on the moon.

They quickly proceed to unpack their scientific payload and explore Earth's natural satellite. Unfortunately the trip has to be cut short not only because of the oxygen issue but due to a far graver development: the spy subplot of the previous book comes to a head when Colonel Jorgen is revealed to have stowed away on the rocket with a gun, and Wolff is revealed as his accomplice and the foreign power's mole in the center. Wolff, who was informed that Jorgen was simply there to observe the expedition is horrified when he finds out Jorgen's plan is to steal the rocket for his employers and maroon everyone else on the Moon. Wolff is forced to launch the rocket at gunpoint but Tintin manages to sabotage it and foil the plot. After interrogating the two, they are locked in the hold but Tintin's move had a grave price: the rocket will have to be repaired while the oxygen supply quickly dwindles.

After leaving the Moon in haste and an incorrect trajectory which causes them to waste even more time and oxygen, Jorgen manages to break free and regain his gun, intending to kill the rest of the crew. He and Wolff struggle causing Jorgen to shoot himself in the heart, killing him instantly. Eventually, Wolff decides to sacrifice himself by leaving the rocket without the others' knowledge so that they have enough oxygen to make it to Earth, leaving a note asking for forgiveness.

The rocket lands on autopilot in Syldavia, with the entire crew unconscious from lack of oxygen. Despite a brief scare with Haddock, everyone has survived. Calculus makes a grand speech claiming that man will return to the moon — prompting an enraged Haddock to vow never to enter a rocket again, claiming that "Man's proper place...is on dear old Earth!"