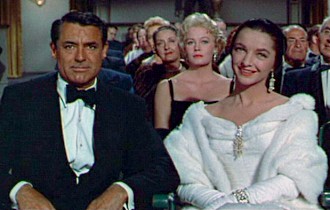 Any surprise who in this couple is bored?
"Don't send flowers
Or take showers
But I'll be there to pull your weeds, oh yeah
I don't read books
I don't French cook
Or stroll around in galleries
I hate opera
I hate Oprah
Don't fill my head with poetry"
— Alice Cooper, Fantasy Man
Advertisement:

Primarily in Sit Coms: Men absolutely loathe opera, classical music, visual arts, and books. But they LOOOOOVE sports. If they don't act in this manner, there's either something wrong with them or they're Camp Gay. Never mind that for a long time virtually all opera and classical music — and most literary books — were written by men specifically as manly diversions, those things aren't manly!

There are also strong class undertones to this trope - being cultured is seen as a middle/upper-class trait, and there is a trend in media for the working classes to be depicted as more masculine (including the women, for that matter). Indeed, this trope is often used in depictions where being cultured is an implied class shorthand for the rich. Also, you'll notice that the women making them go are either completely oblivious to the fact, or don't care, that their companion is not having a good time. There’s some Truth in Television here in that, historically, upper class women didn’t usually have to go out to work, and had servants to do the housework, so they were the people who had most time for culture. Or, looking at it another way, their job was to sustain the culture that marked their families out as upper class.

This is one of the many ways that the Grande Dame will make life an utter Damnation de Faust for her Henpecked Husband.

Compare Men Don't Cry, Women Are Wiser; Buffoonish Tomcat is a related trope for cat examples. When the man is a slob, this trope is almost always included also, but the opposite isn't always true. Surprisingly, despite the fact that The Lad-ette can be basically summarized as "a man's attitudes/behaviors in a woman's body", you very rarely see ladettes who have the same aversion to "culture". Contrast Real Men Wear Pink for manly men unafraid to show their softer side, and Cultured Badass for manly men who find your lack of appreciation for opera grounds for a No-Holds-Barred Beatdown. It's also the reason why most of the adults who have to write The Dreaded "Thank You" Letter are men.