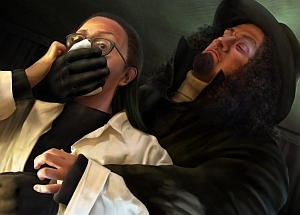 I was wondering where I'd put that CHCl3.
Clank: You'd be surprised how often scientists get kidnapped.
Scientist: Actually, this is mein third time. I'm starting to get used to it.
— Secret Agent Clank
Advertisement:

An occupational hazard of having a specialized talent in demand is that sometimes "demand" can be taken literally — a professional such as a scientist or engineer is kidnapped and coerced into working for the bad guys, under threat to their life or the lives of their loved ones. Although there should be some obvious inherent risks to letting someone hostile to your plans work so intimately with them, doing things no one else in your organization fully understands, the success rate for this method seems to be pretty high — at least until the heroes get around to rescuing them, until the villain decides that they've outlived their usefulness, or until the scientist takes advantage of everyone's ignorance to sabotage the evil plan or craft a weapon that allows him to escape.

Note that this is not the same as kidnapping someone for information, using them as a Living MacGuffin, or having someone Made a Slave for menial (or sexual) tasks — but having a professional work intimately with the most delicate aspects of a plan, requiring highly specialized skills.