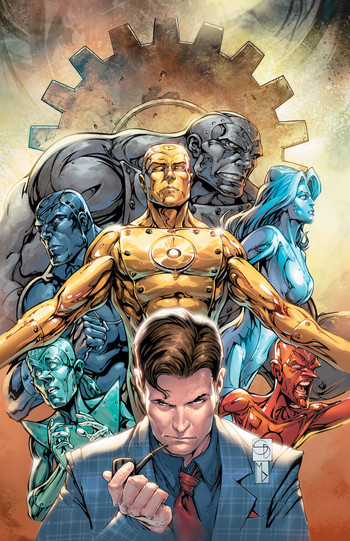 Specifically, the Metal Men are a team of six (sometimes seven) robots created by Dr. Will Magnus, whose powers and personalities are based off their namesake metals: Gold, Mercury, Iron, Lead, Tin, and Platinum (a.k.a. Tina.) In the original series, Tin's girlfriend Nameless - made from a do-it-yourself-kit- was later added.

The team was originally created in 1962 by writer Robert Kanigher, artist Ross Andru, and inker Mike Esposito to fill a last minute vacancy at DC's anthology series Showcase, and because they weren't intended to last past the issue, the robot team was destroyed at the end. However the team proved popular enough to return in the following issues, with their distinguishing feature firmly established: they would willingly throw themselves at any threat and even risk being destroyed because they knew Doc would always gather up their responsometers (microscopic computer brains) and rebuild them.

In their first story, it was established that eccentric genius Will Magnus had invented the responsometer, and used it to create a shape-shifting robot in the form of a woman - Platinum. However due to the unforseen effect of sunspot activity, Platinum somehow developed a human personality - that of a vain girl with a crush on Magnus (a platinum blonde, get it?) Then the U.S. Army asked Magnus to create more robots so they could help stop a giant flying monster that was terrorizing the world. He agreed, and like Platinum, the rest of the Metal Men developed human emotions he didn't intend them to have.

The Metal Men became something of a fan favorite, although they had sporadic success in their own title. Over the course of their series, they faced a number and variety of enemies, including recurring foes such as the Missile Men and the walking chemical vat called Chemo. Keeping with the chemistry theme, some issues even included 'fun factoids'. The original series eventually came to its end in 1978 after 56 issues.

Both during and after the series, there were frequent team ups with other DC heroes, including Batman and The Atom, and occasional appearances in other series. They wouldn't get their own series again until the 1993 miniseries that rewrote their origin so that their personalities originally came from humans. This and other changes were greatly disliked. Thankfully, the miniseries 52 easily fixed this while focusing on Doc Magnus, who would eventually rebuild his Metal Men.

Their series was the 2007 eight-issue miniseries that told a new origin of the metal marvels with the addition of a new member, the female Copper. In 2009, they were featured in the new Doom Patrol series as a second feature. In 2019, they would have a 12-issue maxi-series written by Dan Didio and drawn by artist Shane Davis following the events of Dark Nights: Metal.

that a an animated film adaptation was in development from long-time former Disney directors John Musker and Ron Clements (The Little Mermaid, Aladdin, Hercules, Treasure Planet, The Princess and the Frog, Moana).

Not to be confused with the one Metal Man that fights Mega Man. Or with Marvel's Iron Man.

Tropes related to these characters: