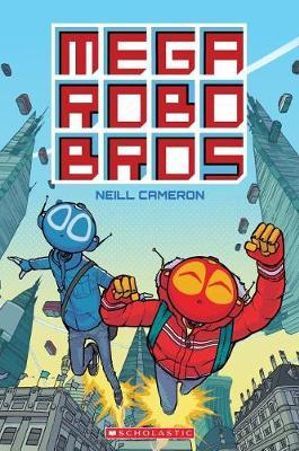 Mega Robo Bros is a Science Fiction comic by Neill Cameron that is serialised in the British comic magazine The Phoenix.

Alexander (Alex) and Frederick (Freddy) Sharma are your average robot boys living with their adopted parents in London. They go to school, they bicker over stuff, they drive their parents up the wall. You know, like average robot boys do.

Oh, and did I mention they were robots?

Yeah, that's kind of important. And because they're robots, their parents want to keep that on the down-low. Thing is, though, that doesn't always work out. Because there's currently some mystery robot out there who seems rather keen on them.

The book was released on June 2nd, 2016, which is followed by a sequel released in the same year known as Mega Robo Rumble, and another sequel released in January 2019 known as Mega Robo Revenge, which is about the two bros' half-brother Wolfram returning to get revenge on Dr Nita Sharma for what happened during the events of Super Robo Seven (a comic that tells a story on what happened before Mega Robo Bros' events).

A spinoff novel series focusing more on Freddy called the Awesome Robot Chronicles was released beginning with the book, Freddy Vs. School in 7 January 2021, with a sequel of it titled Freddy and The New Kid releasing on July 2021.