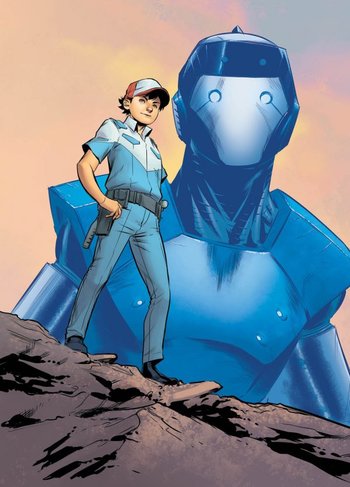 Stanford Yu and Buddy
Mech Cadet Yu is a comic series by Greg Pak. It was first published as the one-shot Los Robos in the comics anthology Shattered, then was adapted into a full series by Boom! Studios. It ran for 12 issues with another release in omnibu format for 3 volumes. The series' concept was influenced by Iron Giant and Mazinger Z.

Years ago, Boy Scout Skip Tanaka was out hiking in the dessert when a Humongous Mecha descended from outer space and formed an unbreakable bond with him. The two would become world-renowned heroes, fighting off numerous alien threats. They began the Sky Corps, a program that trains talented youths so that the best of the best can go to the mountain where Skip's Robo Mech first arrived, where new Robos arrive once a year to bond with the cadets.

Enter Stanford Yu, a Chinese American youth who unfortunately is not a Sky Corps Cadet. He's a janitor there along with his mother. He can only watch the Robos arrive from a distance as he bikes home after a long day's work. That is until a Robo winds up damaged and off course, and lands on his route back home. When Yu tries to guide the Robo towards the mountain, he winds up bonding with it. As there's no known way to break the connection between a Robo and pilot, Yu must attend the Sky Corps academy as a Cadet and learn to defend the planet.