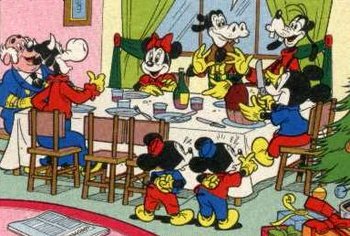 Not shown: Pete and the Phantom Blot, but they weren't invited anyway.
Advertisement:

The universe in which the Disney comics based around Mickey Mouse and his friends takes place. It began with a Newspaper Comic spin-off of the cartoons in 1930 and branched out to Comic Books in 1935, which continue to this day. Major contributors to this Verse include Floyd Gottfredson, Bill Walsh, Bill Wright, Romano Scarpa, Casty, Carl Fallberg, and Paul Murry.

See also Disney Ducks Comic Universe, and the Modular Franchise they both form, the Disney Mouse and Duck Comics. Since this is such a long-running series, you're likely to find more than a few Dead Horse Tropes.

Stories set in the Mickey Mouse Comic Universe with their own pages: