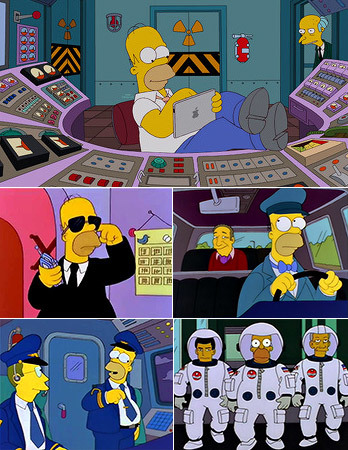 That's one heck of a resume.
"(sighs) Another red-letter day in the life of Donald Duck — off to yet another new job! I'll probably be fired by lunch, so expect me home early!"
— Donald Duck, The Duck Who Never Was
Advertisement:

An episode where a character gets a new job for a week or so. Often happens in teen sitcoms and teen dramas, where a character is forced to get a job by their parents to teach them An Aesop about responsibility or the value of a dollar. At the end of the episode, they're usually allowed to quit so things can Snap Back. It also might be some career, such as singing or cooking, that the character temporarily decides to pursue before something impedes them or they lose interest. If a character has George Jetson Job Security, they might be forced to go through a New Job Episode every so often till Mr. Spacely rehires them.

Compared and contrast New Jobs As The Plot Demands, where a previously-seen character already has a new job for the sake of an Economy Cast. Related to Business as Unusual.

If the character is a teen, expect them to work at a crappy fast food joint, a tacky mid-level chain restaurant, a kiddie arcade/pizza place for snot-nosed brats and their parents celebrating their birthdays, or in retail hell (bonus points if it's an Expy of WalMart).