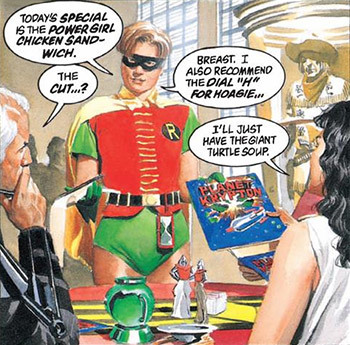 "Stay away from the Swamp Thing Salad."
Advertisement:

The stereotypical casual-dining chain restaurant of American Suburbia, often located in or near The Mall.

These restaurants are likely to be inspired by either idealized, nostalgic Americana, or a stereotypical image of an exotic place like Italy, Mexico, Australia, or Texas. The walls and ceilings are frequently festooned with decorations fitting the theme, such as sports memorabilia, road signs, vintage photos, old toys, guitars, and crab pots.

People actually from those places are likely to find the overly-processed, fancifully-named dishes served here almost unrecognizable. The appetizers range from the conventional mozzarella sticks and buffalo wings to Frankensteinian combinations like pizza nachos and southwestern egg rolls, while entrees run the gamut from traditional pastas and steaks to such monstrosities as cheeseburger quesadillas and Schezuan-style spare ribs, and are often served with buckets of french fries and salads that are anything but healthy. Portion sizes are usually gargantuan, as is the thickness of the menu. The dessert selection usually includes some hazardous-sounding chocolate creation involving the words "volcano" or "lava", and an oddly-flavored milkshake in a giant mug adorned with sugary treats is an option to wash your meal down with.

Many of these establishments have licenses to serve alcohol; when they do, you can be sure that they advertise all manner of proprietary neon-colored cocktails served in portions that seem designed to prevent drunk driving— either by an amount that couldn't intoxicate a flea or an amount that guarantees you won't be able to even find your car.

Often, everything from how customers are greeted to the way items are arranged on the tables are dictated by ultra-strict corporate guidelines, resulting in an eerily identical experience regardless of which branch of the restaurant one patronizes. Happiness Is Mandatory for the embarrassingly-dressed wait staff. Occasionally, a customer celebrating his birthday there will get an earful as all the restaraunt’s employees chant a custom corporate birthday song (since "Happy Birthday to You!" was copyrighted until 2015) while clapping.

It has begun to replace the Malt Shop as a stock setting in fiction, since there aren't many malt shops around any more. (Ironically, most of the few restaurants that go for the ‘50s malt shop’ vibe these days are places like Johnny Rockets and Red Robin, which are examples of this trope in their own right.)

Crocodile Rob's is an Australia-themed restaurant. Decorations include boomerangs and koala crossing signs on the walls and two stuffed crocodiles in the middle of the floor.

Crocodile Rob's is an Australia-themed restaurant. Decorations include boomerangs and koala crossing signs on the walls and two stuffed crocodiles in the middle of the floor.