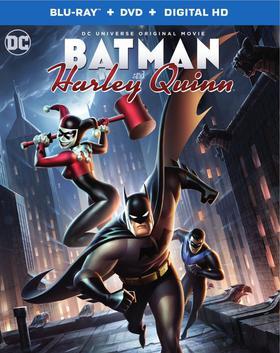 A movie in the DC Universe Animated Original Movies line, Batman and Harley Quinn is an original story created by Bruce Timm. It's about Harley Quinn teaming up with Batman against Poison Ivy and Jason Woodrue. It stars Kevin Conroy as Batman, Loren Lester as Nightwing, Melissa Rauch as Harley Quinn, Paget Brewster as Poison Ivy, and Kevin Michael Richardson as Jason Woodrue. It uses the same animation style as The New Batman Adventures, and Bruce Timm treated this story as part of the DC Animated Universe continuity.

Poison Ivy has been recruited by Jason Woodrue (aka, the "Floronic Man") in a new plan to destroy humanity and let plant life reclaim the Earth. In order to gain a better understanding of Ivy and a way to defeat her, Batman and Nightwing are forced to recruit Poison Ivy's BFF, Harley Quinn, who has seemingly gone clean and retired from crime since her latest parole release.

Tropes in Harley Quinn and Batman