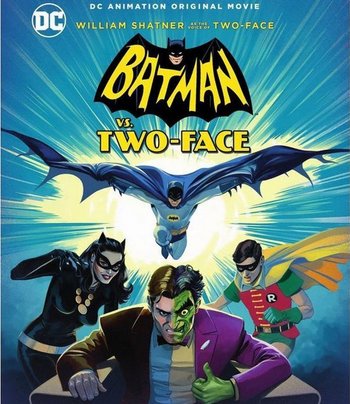 Batman vs. Two-Face is a 2017 Direct to Video animated movie in the DC Universe Animated Original Movies line. It is a sequel to 2016's Batman: Return of the Caped Crusaders, and pays homage to the 1960s Batman series once again, with some of its cast returning. Adam West voices Batman, Burt Ward voices Robin, Julie Newmar voices Catwoman, and William Shatner voices Two-Face. It is the last time Adam West portrayed Batman in any media; he completed his voiceover work prior to his passing on June 9th 2017.

Scientist Hugo Strange has invented a machine that can drain all the evil out of a person. He tries it out on some Batman's most dastardly rogues, while Batman, Robin, and District Attorney Harvey Dent witness the experiment. Unfortunately, Batman's rogues prove too evil and the machine overloads, disfiguring Dent in the process. Dent—now calling himself Two-Face—goes on a crime spree where all his decisions are determined by the flip of a scarred silver dollar.

Batman vs. Two-Face provides examples of: