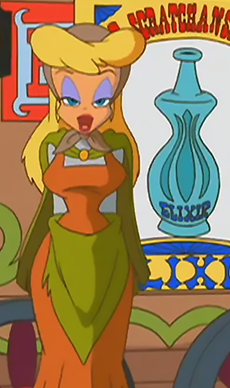 "How'd you come up with the [bottle's] design?"
"It just came to me, from who knows where!"
"If she was real, with that teeny waist, and the top and the bottom, they would just fall over. [laughs] It's not possible!"
— Richard Williams, animation director on Who Framed Roger Rabbit, talking about Jessica Rabbit.
Advertisement:

This is based on the "hourglass figure" beauty ideal, where a woman is considered attractive if she has big breasts, a narrow waist, and wide hips. A narrow waist not only implies physical fitness but also makes the breasts look bigger and the hips look wider by comparison. The attainability of these proportions in real life depends a lot on personal genetics, but the medium of drawing allows an exaggerated archetype to be portrayed without the restraints of biology. A woman with an IHF is always designed to be attractive, even in the cases where she's not Ms. Fanservice or a Head-Turning Beauty: Monsters with insect-like narrow waists do not count, even if the shape reminds one of an hourglass.

For the garment which allows people who aren't blessed with a natural IHF to mold their bodies closer to the ideal, see Of Corsets Sexy and Of Corset Hurts. Male crossdressers, Transgender girls, or even cisgender girls who just feel too thin can also use Fake Boobs, and/or similar padding about the hips to help with this. Other tropes involve some of the same attributes but go for a different result. Noodle People don't just have thin waists, but their entire torsos as well as their limbs are elongated and thin. Hartman Hips is the term for when a narrow waist and wide hips are used to represent adult womanhood, but the bust is de-emphasized to avoid sexual connotations. Contrast Pettanko (which is what most Hollywood Thin women are without the help of padded bras or implants; the female breast is largely fat when not nursing). When other characters notice, they might say that she has Curves in All the Right Places.