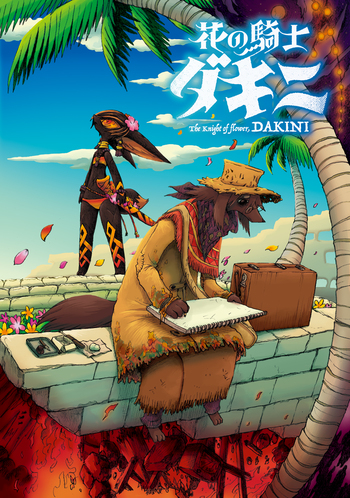 Eiden always had a natural talent for art. His skills grew as time went on until he was admitted into a school in the far off town of Buribcus to study art.

Then the Sky Golems attacked.

A year later in Enoth, Eiden is struggling to get by, both in his art and in general. After getting lost, he encounters a strange girl looking up at the sky that takes notice of his art. Later, while trying to figure out what to do next, he's the first to notice that the Sky Golems are approaching. Frozen in his tracks, he mentally curses the golems as they're about to fire their Straight Thunders, but the girl from earlier leaps into the air and reflects the shot with her sword. Her name is Dakini, and her mission is to destroy all of the golems and their leader. This is the story of her travels with Eiden.

Flower Knight Dakini (花の騎士ダキニ Hana no Kishi Dakini) is a manga created by Sho Shibamoto and the final part of his Verse, with The Jackalope and Pandemonium Wizard Village taking place before it.

The manga is currently on haitus, due to Sho starting work on Yorozu Locksmith's Casebook for Level-5's webmanga platform Manga-5.

The official English translation is available from Kindle Unlimited for free here.