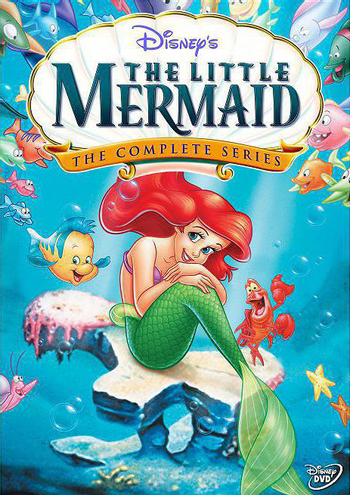 A Saturday Morning Cartoon by Disney, based on their 1989 film of the same name, which ran on CBS from September 11, 1992 to November 26, 1994. It was the second (after TaleSpin) in Disney's 90's-era series of TV spinoffs of their more popular movies.note  Later entries include TV spinoffs of Aladdin, The Lion King, Hercules, Tarzan, and 101 Dalmatians. Unlike Tale Spin (but like later entries), however, this cartoon typically keeps continuity with its theatrical source, and acts as something of an Expanded Universe, giving backstories to many characters, fleshing out relationships, and allowing them to go on new adventures. It is a direct prequel to the movie, being set before Ariel met Prince Eric (but after the subsequent Direct to Video movie The Little Mermaid III: Ariel's Beginning, which retcons some elements introduced in this cartoon, notably how Ariel met Flounder).
Advertisement:

As is typical of Disney's TV spinoffs, the tone of this cartoon is considerably lighter and more comedic than the movie on which it's based, but unlike many Disney TV series spin-offs, it kept one element of the first movie: the musical format, as the series was gifted with a new musical number in almost every episode. It also contained more obvious (and bizarre) shout outs – a recurring comic villain was called Lobster Mobster, complete with an Edward G. Robinson imitation voice.

After three seasons totalling 31 episodes, it went into reruns on the Disney Channel. It later ran on Toon Disney and Disney Junior. In 2018, the entire series was released on iTunes and Amazon Video, remastered in 16x9 HD. The series is also available on Disney+.

Ariel expresses her wishes at having two tails to do the ballet like they do on land.

Ariel expresses her wishes at having two tails to do the ballet like they do on land.