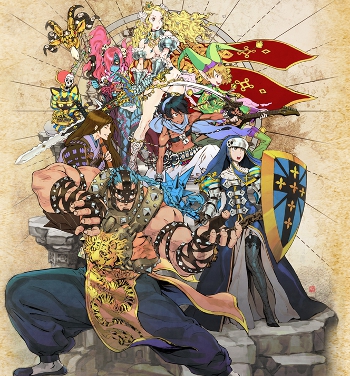 ...From the bizarre world of Kinu Nishimura
There always existed two races in this world: man and monster, both enjoying a separate peace.
Centuries have passed, and mankind has begun to flourish.
A shadow now looms over the land. The monsters have risen up against man. It is a time of great fear and suffering.

And so begins our tale...
— The game's opening narration
Advertisement:

Code of Princess is a Beat 'em Up game with customizable RPG Elements for the Nintendo 3DS and Steam by Agatsuma Entertainment and distributed by Atlus' parent company Index Corporation, heavily inspired by Guardian Heroes. Character and World Design were handled by Kinu Nishimura, famous for her work on the Street Fighter series and 999 (as well as its follow-up, Virtue's Last Reward).

When the kingdom of DeLuxia falls to a monster attack, Princess Solange Blanchefleur de Lux decides to take up her family's sword, the legendary DeLuxcalibur, and find the root of the monsters' sudden violent behavior. Meanwhile, the mysterious and wicked queen of Distron, Queen Distiny, and her Distron Army swoop in to take care of the monsters, pinning the blame on DeLuxia's royal family. Now a fugitive on the run, Solange will need all the help she can get to evade the Distron Army while also fighting her way past scores of vicious monsters. On her way out of the royal city, she runs into several people who join her side as allies, including:

During their travels, they also run into others who have been affected by recent events. They include the powerful, but gentle martial artist Master T Drakkhen, the Blind Samurai Shooting Star Tsukikage, and the strict Battle Nun Sister Helga Wilhelmina (often known as "Sister Hel" due to her strict ways). As these people all come together, they soon realize that Queen Distiny is not who she seems... Hot on their tail is also Marcopolis "Marco" Neko, a dangerous feline merchant to whom Allegro is indebted, though Marco is more than happy to sell equipment to the party despite the debt.

What makes the game's story stand out is the very funny script, gentle jabs at RPG and fantasy conventions, and the quirky, occasionally hammy cast of characters.

Atlus released the game in the USA in October 2012. It was later re-released on the PC through Steam in April 2016. An enhanced HD version, dubbed Code of Princess EX, was released for the Nintendo Switch on July 31, 2018 and for Steam on October 1st, 2020.