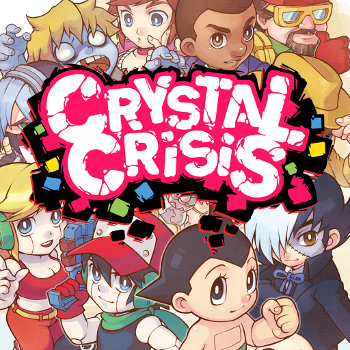 "The most ambitious crossover since the last one!"
—"Crystal Crisis Coming May 28th!" Trailer

Crystal Crisis is a color-matching falling blocks puzzle game from Nicalis made for the Nintendo Switch, with PlayStation 4 and PC versions released later. It serves as a counterpart to Blade Strangers and features characters from various games the company has been involved with, along with a few unexpected guests.

The game is designed for competitive play and blocks are cleared out when matched with a Crystal of their same color, similar to Puzzle Fighter. Scoring chains causes garbage blocks to fill the opponent's field. Those can't be cleared but turn into normal blocks after a few seconds. Characters can also build their Burst Meter to pull off a super move that can help them or hinder their opponent. There is also a unique mechanic where one can "wrap" their crystals from one side of the field to the other, allowing for more strategies such as splitting crystals in two on each side.

The story consists of an Artifact of Doom called the "Red Crystal" tearing open boundaries between worlds, forcing the worlds' heroes to band together to destroy it while contending with a group of villains led by Ballos who wish to claim the crystal for themselves.