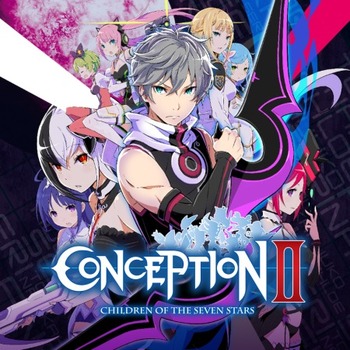 God's Gift to women. Yes, that is what they call him.
Conception II: Children of the Seven Stars is an RPG/Dating Sim hybrid created by Spike Chunsoft (of Danganronpa and Zero Escape fame) released in Japan for the PlayStation Vita and the Nintendo 3DS in 2013 and in America in 2014. It is the second entry of the Conception series following Conception: Please Give Birth to My Child!.
Advertisement:

You play as a newcomer to a private academy (default name Wake Archus) who turns out to be the God's Gift: A being with a large supply of ether energy who has the power to perfectly conceive Star Children and enter the Dusk Circles - nests of monsters who terrorize the whole world of Aterra. It's up to you, along with seven girls you can "Classmate" with, to stop those Dusk Circles.

The gameplay is a dungeon crawler similar to the likes of Persona 3 and Persona 4, as in you explore several random-generated labyrinths along with the heroine of your choice and nine of your chosen star children. During the dungeon explorations, you will find items, weapons and armor to help you combat the enemies.

The other thing about the game is the Classmating system. By strengthening your bonds with each of the heroines, you create stronger star children who can assist you and help you progress in the game.

Despite being the second entry, it is not necessary to play the first game because the stories are not related.