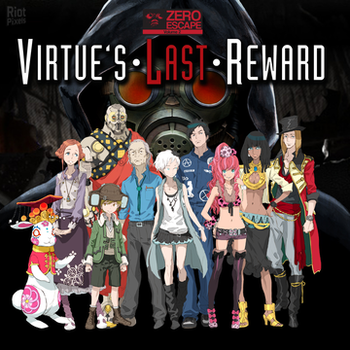 So, what's it going to be? Will you choose to Ally? Or to Betray? note From left to right: Zero Jr., Luna, K, Quark, Tenmyouji, Phi, Sigma, Clover, Alice, Dio
"Tu fui, ego eris." Translation "What you are, I was; what I am, you will be."
Advertisement:

Virtue's Last Reward note (Kyokugen Dasshutsu ADV: Zennin Shibou Desu; lit. "Extreme Escape Adventure: Good People Die / I Want To Be A Good Person") is a Visual Novel for the Nintendo 3DS and PlayStation Vita, the sequel to the DS's Nine Hours, Nine Persons, Nine Doors and the second game in the Zero Escape series. It was released in February 2012 in Japan, was released October 23rd in America, and November 2012 in Europe, courtesy of Rising Star Games.

An average college student called Sigma awakens inside an elevator, finding himself trapped with a strange girl named Phi who somehow knows him. Working together to escape the room, Sigma and Phi discover that along with seven other victims, they have been kidnapped, trapped inside a large warehouse and forced to play the "Nonary Game: Ambidex Edition" by an A.I. program calling itself "Zero III".

As with 999, each player has a numbered bracelet attached to their wrist and will be killed if they break the rules. However, the "Ambidex Edition" has a twist: to escape the warehouse, the nine players must accumulate points by splitting into teams of three (further divided into two sub-teams, a duo and a single) and completing deadly challenges. Nine points will grant a player their freedom, but losing all their points will reward a player with death. Reminiscent of the Prisoner's Dilemma, a sub-team can choose to betray their partnered sub-team in order to steal points from them, but if both sub-teams choose "Betray" then neither gain anything. Furthermore, the exit door will only open once, regardless of how many players have enough points to leave.

Check out the trailer here

. There is also a promo anime for the game, available here

On February 2014, it was announced that due to low sales, VLR's sequel was being put on hiatus. Fans started a Facebook campaign

to show support for the series. After a viral marketing campaign involving a website made by English localization company Aksys Games, Zero Time Dilemma was officially announced at Anime Expo 2015 for a Summer 2016 release.

See also no-one has to die., a free browser game which is a love letter of sorts to VLR, using similar concepts with a unique spin.

Be warned that like 999, this game is a minefield of spoilers, so do not read ahead if you're spoiler-averse.

Seek a way out!

open/close all folders
Tropes # to C
Tropes D to G
Tropes H to K
Tropes L to R
Tropes S to V
Tropes W to Z
You found it!
Feedback