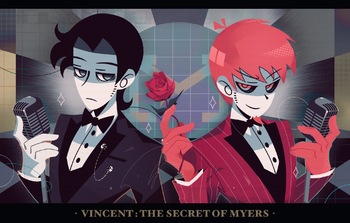 Vincent: The Secret of Myers (often shortened to VTSOM) is a horror-mystery point-and-click Visual Novel made by Dino999z

. After waking up in an unfamiliar mansion, the protagonist is trying to recover her forgotten memories by searching the abandoned Myers Corporation building. Along the way, she discovers numerous secrets about said corporation and the people involved.

A major mechanic the story has is the protagonist's ability to use certain objects to see into the past and collect clues to solve puzzles, while also adding lore to the story and providing insight into multiple characters.

Four chapters have been released so far, with a planned six in total. The game's development was placed on indefinite hiatus in July 2022. It can be downloaded here

Shares a universe with Therapy with Dr. Albert Krueger by the same developer.