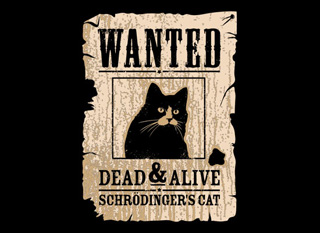 This poster is indeterminably funny or not until observed.
"Do you know that thought experiment with the cat in the box with the poison? Theory requires the cat be both alive and dead until observed. Well, I actually performed the experiment. Dozens of times. The bad news is that reality doesn't exist. The good news is we have a new cat graveyard."
— GLaDOS, Portal 2: Lab Rat
Advertisement:

is increasing in popularity as a Motif in fiction. Erwin Schrödinger's thought experiment involved a cat sealed inside a box with a Geiger counter. The Geiger counter controls a mechanism to smash a vial of toxic gas, killing the cat. A small amount of radioactive substance is placed near the Geiger counter, calibrated so that there is a 50% chance of triggering the death trap within one hour. The thing is, after an hour, until the box is open, there is no way to determine whether the cat inside is alive or dead, thus allowing the cat to be both alive and dead.

The thought experiment was originally a critique of the Copenhagen interpretation

The reason the experiment is interesting is that in quantum mechanics, things like subatomic particles routinely exist in superpositions of states, and correct predictions of the outcomes of certain experiments can only be made by taking these effects into accountnote A classical example is the double-slit experiment for electrons where the resulting interference pattern is only expected if you assume the electron is in a superposition of states. The experiment posits that if we can accept that small particles (like the radioactive trigger) can be in these kinds of states, then we have to accept that large objects (like the cat) can also be in these kinds of states, raising the question of why we don't routinely observe that.

This thought experiment immediately became popular as a metaphor for uncertainty of the truth, fate, Quantum Physics, how quantum physics can do anything, and whatever the hell is inside that box. Ironically, the original experiment was used to show how stupid the idea of superposition was.

As mentioned earlier, the supposed paradox relies on a flawed understanding of Quantum Physics. The flaw lies in not knowing what it means to observe something; observation is not the passive thing like in the world of the everyday, but an active process. In the theoretical box (no physicist would actually do this; it's highly unethical), the observer isn't the scientist, it's not even the cat; it's the Geiger counter, and it keeps the wave function collapsed into either 100% alive or 100% dead, and not 50% both. To learn more, see the Quantum Physics page. In short, the Copenhagen Interpretation doesn't predict a cat simultaneously alive and dead, but rather a cat that is fully alive until it is fully dead. To put it another way, even famous and intelligent physicists like Schrödinger can be completely wrong.

Sometimes though, it's just used to show off the writer's cleverness. Or not.

that explains the principle in question.

As you might know, even This Very Wiki is fond of using this. It's the Trope Namer for:

Schrödinger's Cat may or may not exist in these works, you'll have to check to know for sure: