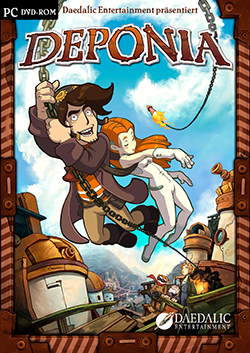 Narrator: It's kind of pathetic, you get all erratic / about dirty dishes congesting the sink. / I'm tired of your bothers, remember our fathers / who dwelled in a world filled with rubbish and stink. / But when all hope was lost, someone raised from the dust. / He was handsome and cunning, his haircut had style! / Courage was shining in his eyes as he said "Screw you guys! / Mind your own business, I'm off now, goodbye!"
Advertisement:
Chorus: Huzzah, he's off now, goodbye!

On a landfill-planet called Deponia, there lives a clever and ambitious but reckless and short-sighted fool named Rufus, who wants nothing more than to get off of Deponia and reach the beautiful flying city of Elysium in the sky. After his latest failed escape attempt, he manages to knock an Elysian girl called Goal off the cruiser she is traveling on to the surface below, breaking her brain implant in the process. This prompts her fiance to offer a reward for her return, giving the egoistical Rufus a ticket off the junk pile he calls home. So begins a point-and-click adventure where Rufus takes his unconscious love from his home in Kuvaq across the trash-filled world to the meeting with her fiance, all the while chased by the Organon, cyborg-soldiers with insidious plans for Goal and Deponia.

The rest of the cast includes a variety of colorful characters, almost all of whom hate or are casually contemptuous of Rufus. These include Toni, Rufus' ex-girlfriend; Wenzel, Rufus' best friend who laughs at his multiple attempts to escape; Cletus, Goal's Elysian fiance who looks identical to Rufus but with a goatee; and Doc, a handyman and brain surgeon who enjoys meditation and alcohol. Deponia, also known as Welcome to Deponia, was released in January 2012 by Daedalic Entertainment.

A sequel titled Chaos on Deponia was released in November, 2012. This game takes place just a few days after the end of the first game. Rufus, having turned over a new leaf and completely reformed, finds himself having to save Goal once again from a problem that he created. Specifically, her mind has been split into three parts, each with a fragment of her identity, and he needs to earn the respect/affection of all of them in order to put Goal back together again. And then he needs to save Deponia from the Organon. Again.

The third game and Grand Finale of the trilogy, titled Goodbye Deponia, was released on October 18, 2013. After putting Goal's personality back together, she disappears yet again. When looking for her, he finds a cloning machine and thinks that he has found the solution to his problem: More Rufuses would mean more efficiency in his mission! ...Right? Now Rufus has to coordinate his tripled selves to find Goal, reach Elysium and save Deponia from the forces of Organon once and for all.

That was thought to be the end of the series, but on February 25th, 2016, Daedalic announced a fourth game, Deponia Doomsday, released five days later on March 1st, 2016. Rufus wakes up from a very strange and horrifying dream in which, right after the ending of the third game, Elysium crashed into Deponia, leaving him as the only survivor on the planet. Determined to not let that happen and with the help of McChronicle, an eccentric scientist that has detected temporal anomalies manifesting on the planet, Rufus must travel in time to prevent Deponia and Elysium from being destroyed. Yet again.

Warning! This being an Adventure Game series, spoilers abound. Browse at your own risk!

Huzzah, back to the top!