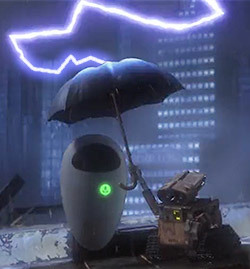 Chivalry, meet comedy. Comedy, meet chivalry. I think you two will get along just fine...
Advertisement:

Generally Played for Laughs, it's rare that any lasting injury happens to a character who has this happen to them; apart from the usual effects of such slapstick humor, usually the worst that happens to the character is that their umbrella gets ruined, and they get cold and wet, when in reality, lightning kills or seriously injures people.

There's a certain amount of irony in this trope: you carry an umbrella to protect yourself from the fury of a storm, and when this happens, it's as if the storm is invoking Improvised Lightning Rod on your umbrella to punish you for the audacity to think you have the right to stay dry!

As far as Truth in Television goes, storms are miles wide and miles high, and when you take that sense of scale into account, having a meter-long-at-most piece of metal in your hands isn't going to have an appreciable effect on the storm's target selection. That being said, the way you keep yourself safe from lightning is to not be outdoors during a lightning storm in the first place.

Note: If an umbrella literally has a lightning rod built in, that either implies this trope by saying lightning hits umbrellas often enough for a lightning-rod feature to be needed, or else it invokes the trope if one or more characters actually want lightning to hit the umbrella. If lightning actually hits the umbrella, then it's this trope played straight.