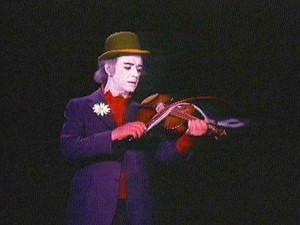 Hope the music store gave him a receipt for that bow
Advertisement:

Monsieur Pointu is a 1975 animated short directed by Andre Leduc and Bernard Longpre, produced by the National Film Board of Canada.

It is a tribute to Paul Cormier, aka "Monsieur Pointu", a famous Quebec violinist. In the short, Pointu and his violin appear on a bare black stage. Cormier plays his violin, but the violin starts struggling against him. Pointu, his violin, and even his clothes start breaking out in all sorts of dreamlike, surreal ways.

Employs the "pixilation" technique of animation pioneered by Norman McLaren and made famous by several films produced by the NFB in this era.