Film / Michael Jackson's This Is It 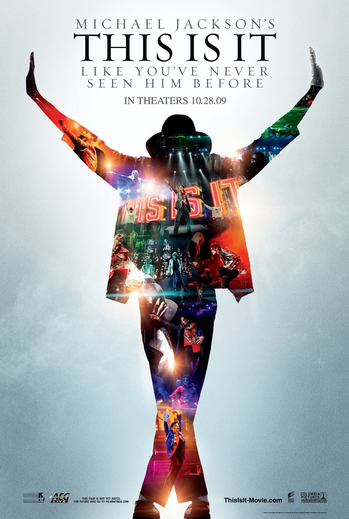 This is it,
Here I stand
I'm the light of the world,
I feel grand...
Advertisement:

On March 5, 2009, music legend Michael Jackson, who had spent most of the past decade and a half being dogged by controversy and becoming an increasingly Reclusive Artist, held a press conference at London's O2 Arena to announce This is It, a 10-concert residency (later increased to 31, then 50, due to public demand) that was to be held in the O2 from July 2009 to March 2010. Jackson described the series as his final curtain call, and his concert promoters AEG Live later confirmed that plans for an international tour were in the works.

Being Jackson's first significant concert event since the HIStory World Tour in 1997, it was touted as pop music's greatest comeback, and the biggest concert series ever held inside the O2, breaking the record set by his rival Prince's 21 Nights In London: The Earth Tour concerts. Overnight, sales of Jackson's discography skyrocketed, with sales of Thriller, Dangerous, Bad and other albums rising 100% or more, and millions of people around the world all tried to buy tickets for This is It, selling all 750,000 seats in less than four hours. In the months leading up to the first concert, Jackson and his troupe rehearsed nonstop at the Staples Center and The Forum in Los Angeles to prepare for This is It.

In the late summer of that same year, footage of Jackson performing "They Don't Care About Us" from the rehearsals leaked online, leading to many fans clamoring for more rehearsal footage of Jackson. So AEG Live and Columbia Pictures, with the approval of Jackson's estate, enlisted This Is It director and Jackson's personal friend Kenny Ortega to compile and condense over 100 hours worth of behind the scenes footage into a 111-minute movie.

The end result was Michael Jackson's This is It, a documentary/concert movie that documents Michael Jackson's last rehearsals, showing him not only performing, but also going into the audition and creative process, and showing interviews with the musicians and dancers involved in the production. Initially given a limited released on October 28, 2009, the movie topped the box office in North America and in several countries around the world, quickly becoming the highest grossing concert film of all time. This prompted Columbia to extend the theater screenings to December. Critics, fans, and even some of Jackson's family members criticized Columbia and Jackson's estate for releasing the rehearsal footage to cash in on his death, but still gave the film largely positive reviews, praising Jackson's performance and portrayal, as well as giving a glimpse of What Could Have Been at London.

Accompanying the movie was a two-disc album featuring most of the songs performed in the movie, plus unreleased demos and a brand new song titled after the movie. It debuted at number one on the Billboard 200 on November 4, 2009, giving Jackson his first number-one album since 2001.

Songs that appeared in the movie: