Western Animation / Me and My Moulton 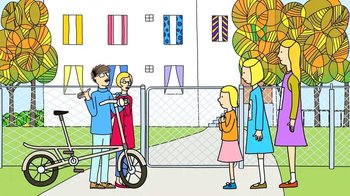 Me and My Moulton is a 2014 animated short film (14 minutes) directed by Torill Kove. It was co-produced by Norway's Mikrofilm and the National Film Board of Canada.

The short is told from the POV of a 7-year-old girl, the middle of three sisters, the youngest being five and the oldest being nine. The narrator remembers her childhood in Norway, and her unusual parents. Her mom and dad are both hippie architects, and have designed all the furniture in their house, which is decidedly unconventional. The narrator explains that her father is the only man in the entire village with a mustache, and he's nearly blind in one eye, and her parents insist on ordering a bicycle from England instead of just getting one at the local store. The girl comes to be vaguely embarrassed by her dad.