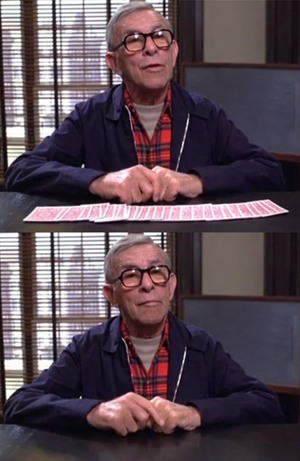 How God does card tricks.
A camera trick used a great deal before more sophisticated special effects were contrived. They stop the camera, change or add something to the shot, and start it again with everything else in the same positions. It's entirely possible this was the very first special effect, used in films made in the first years of cinema, like J. Stuart Blackton's Enchanted Drawing, in which a vaudeville artist draws a glass of wine and then magically pulls a real glass full of real wine off the page.
Advertisement:

Also known as "locking off."

Compare to Match Cut and Gilligan Cut. A Stop Trick done badly could result in a Jump Cut.