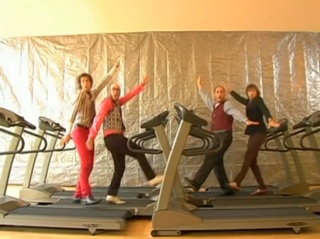 OK Go is an Alternative Rock/Power Pop band. The band formed in 1998, and have gone from being an also-ran in the early 2000s "Return of Rock" that also spawned The Strokes and The White Stripes to being internationally famous for their inventive music videos which are often complex, shot in one take and on a low budget.
Advertisement:

Their most recognized song is "Here It Goes Again", famous for the music video where the four members performed a choreographed dance over several sets of treadmills (see right). More recently, "This Too Shall Pass" gained a degree of notoriety thanks to its Rube Goldberg machine video. They got really famous after winning a MacArthur Genius Grant for the video for “upside down and inside out.”

This band provides examples of the following tropes