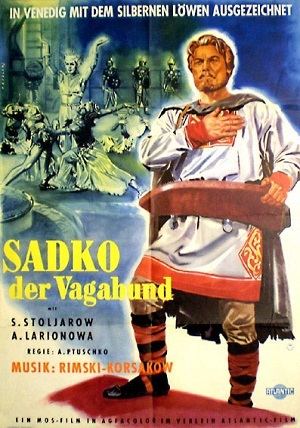 Sadko is a 1952 Soviet fantasy film directed by Aleksandr Ptushko and is based on the opera of the same name by Nikolai Rimsky-Korsakov. It centers on the Russian hero Sadko and his attempts to bring happiness to the inhabitants of Novgorod, and employs a number of elements from the original Sadko mythos, such as a wager with wealthy merchants to catch a golden fish from the sea.

In 1963, a English dub of the film, produced by Roger Corman, was released, with the adapted script written by a young (though uncredited) Francis Ford Coppola. The dub significantly altered the film to instead be a Sinbad the Sailor story, and several names and places were altered to disguise their Russian origins; perhaps most significantly (other than the lead character's name), the city of Novgorod was renamed "Copasand". The dub was also noted to shortening the film from 85 to 79 minutes (mostly through removing scenes containing songs), and giving it a slightly Campier tone.

Sadko, aka Sinbad, arrives in his home city Novgorod/Copasand to find a vast social gap between the wealthy merchants of the city and the lower-class citizens. In an attempt to even the playing field and bring happiness to the people, Sinbadko makes a bet with the merchants that, if he can catch a golden fish from the sea, they will give him the keys to their storehouses. He catches his fish with the help of Magical Girl the Ilmen Princess (Morgyana in English), daughter of the Sea Tsar (aka Neptune), gets the merchants' loot, and promptly gives it all away. In the midst of all this, Sinbadko develops (mostly offscreen) a relationship with a Scandarabian girl by the name of Lyubava (or, Luberia).

However, the party comes to a quick stop once the money is all gone. And so Sinbadko endeavors to search the world for a so-called "Bluebird of Happiness" which will bring permanent joy to his people. All out of money, he needs help again from Morgyana, but with a fresh catch of golden fish he is soon able to build boats and hire a loyal crew, and they're off on a series of episodish mini-adventures.

The quest eventually brings them to India, where a Jamie Farr-ish prince holds in his possession a reputedly magical bird. Prince Farr challenges our heroes to a game of chess with the bird as a prize, and naturally Sinbadko wins. But the prince is a sore loser and locks them all inside the vault with the bird. The bird, for its part, is not a "Bluebird Of Happiness" but rather a "Phoenix Of Ennui" (or something) which sings only of sleep with a remarkably hypnotic voice. Sinbadko is disappointed but takes the bird with him anyway, using its hypnotic song to escape the Indian armies.

On the voyage back home, the fleet is beset by a violent storm, and Sinbadko sacrifices himself to the sea for the sake of his crew (not that it helps). Sinbadko sinks to the bottom of the ocean and is adopted into the family of Neptune, God of the Sea, who wishes Sinbadko to stay and entertain him, even offering to marry the mortal to one of his daughters in order to tie him to the undersea kingdom. Of course, Sinbadko chooses as his new wife his old pal Morgyana, who gives him leave to return to his own world.

And joy of joys, just as Sinbadko makes his, er, not-so-triumphal return to his home, so also arrives his crew, having ultimately weathered the stormy seas. Alas, Sinbadko has no "Bluebird Of Happiness" to give to his people, but he does have An Aesop: "Follow your hearts to happiness!"