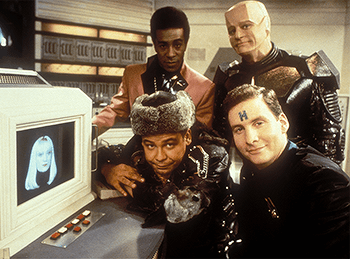 The Boys from the Dwarf note Clockwise from bottom right: Rimmer, Lister, Holly, Cat and Kryten
"As the days go by, we face the increasing inevitability that we are alone in a godless, uninhabited, hostile and meaningless universe. Still, you've got to laugh, haven't you?"
— Holly
Advertisement:

Red Dwarf is a British sci-fi TV Sitcom (1988-93; 1997-99; 2009; 2012; 2016-17; 2020) and book series created by Rob Grant and Doug Naylor about an enormous interplanetary mining ship (the eponymous Red Dwarf), the crew of which is almost completely wiped out by a radiation leak in the first episode.note (The TV series was born as a short serial in the radio comedy show Son of Cliché, also written by Grant/Naylor. The parent "series" on radio was called Dave Hollins: Space Cadet and contained sketches and ideas later recycled for the TV series.) One man survives: a chicken-soup-machine repairman from Liverpool named Dave Lister, preserved because he is in suspended animation as punishment for bringing a pregnant cat on board illegally. The shipboard AI, Holly, sets a course out of the solar system, planning to release Lister from stasis once the radiation from the leak drops to a safe level.

Lister awakens to the news that Everybody's Dead, Dave. As he is now the last living human the ship's computer Holly creates him some company, despite his personal preferences, in a hologram of his despised former bunkmate Second Technician Arnold J. Rimmer — on the basis that an ongoing mission to get on Rimmer's nerves in death as well as in life would do most in the long run for Lister's sanity. The pair discover the Cat, the last known member of his race Felis sapiens, which evolved from the pregnant cat that got Lister put in suspended animation in the first place. Lister decides that he wants to return to Earth, despite the fact that no-one aboard knows if the human race still exists, and despite the problem that the journey back will take another three million years at sub-lightspeed.note (Even turning the ship around at near lightspeed will take 4000 years according to Lister — though this is later contradicted by the series 2 episode "Better Than Life", where the ship has already turned and started heading towards Earth. Red Dwarf was never too concerned with continuity) The final regular member of the cast, Kryten — an android the others discover still serving his crew, unaware that they had all died years ago — appeared as a one-shot character in the second series before becoming a permanent addition in the third.

Despite the superficially high concept, this was fundamentally just another Brit Com about amusing characters bickering amongst themselves, similar to The Hitchhiker's Guide to the Galaxy, with a fair amount of monsters, Time Travel and the like thrown in. However, it is notable for a sci-fi-based series in that the writers actively worked to avert, or at least lampshade, many tropes associated with the genre — nearly always for comedic effect.

Following Series VI in 1993, Grant and Naylor's writing partnership came to an end, and since then Naylor has continued to helm the franchise by himself. After an initial pause followed by two less well-received series, Series VIII finished in 1999 and various factors — primarily repeated attempts to get a feature film off the ground — meant a complete lack of any new TV (or book) output for fully ten years.

Unexpectedly though the rights were eventually picked up from the BBC by digital channel Davenote (a free-to-air channel owned by UKTV, which operates several free and subscription channels) and it produced and broadcast a three-part, Post Modern, movie-length miniseries Red Dwarf: Back to Earth across the Easter weekend of 2009. BtE broke digital TV viewership records at the time of airing, signalling that the show still had an audience after a decade of TV absence. Not long after, Dave commissioned a full, more conventional series of 6 half-hour episodes recorded in front of a studio audience, returning the show to its 'classic' original format for the first time since 1993. This eventually aired in 2012 as Series X — officially retconning BtE into a 'ninth series', a subject of much contention in the fanbase due to it taking place after a fictional Series 9 that exists only within the show's reality. Two more series filmed back-to-back followed in 2016 and 2017, with a growing sense that the show was recovering something of its old footing once more. From 2019, the characters' enduring place in pop culture saw them appear in an AA roadside breakdown assistance ad

. And then, despite the 30-year failure of The Film of the Series to ever get made, an aptly-titled special feature-length episode Red Dwarf: The Promised Land at last appeared in 2020.

Fleetway Editions published Red Dwarf Magazine/Red Dwarf Smegazine (the title changed after the third issue), featuring comics and stories which are some of the only officially licensed material not written by Grant or Naylor, from 1992-94.

Red Dwarf: The Roleplaying Game was released by Deep 7 in 2002.

There were two attempts to get an Red Dwarf USA series off the ground in 1992. However, both of them failed in the end.

Statler: I don't know about you, Waldorf, but being stuck in a spaceship for three million years sure doesn't sound fun to me.
Waldorf: It could be worse. We'd have those guys for company.
Both: DOH - hoh - hoh!

"It's cold outside, there's no kind of atmosphere..."
Feedback

The machines onboard Red Dwarf, Tired of being treated as Second Class Citazens. Go on strike when they find out that the crew were going to leave them behind on the ship to be Sucked into a Black Hole.

Example of:
Turned Against Their Masters

The machines onboard Red Dwarf, Tired of being treated as Second Class Citazens. Go on strike when they find out that the crew were going to leave them behind on the ship to be Sucked into a Black Hole.