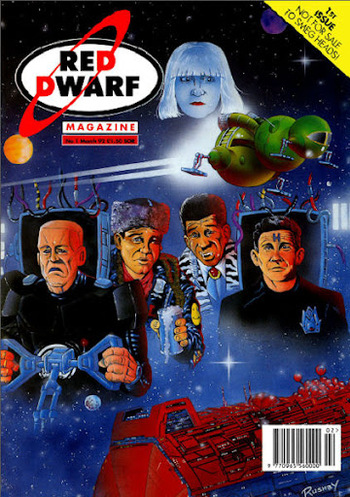 The Cover for the First Issue
Advertisement:

Red Dwarf Smegazine (originally Red Dwarf Magazine for the first 2 issues) was a magazine produced by Fleetway Editions based on the TV show Red Dwarf. It ran for 23 issues between 1992 and 1994 before being cancelled, covering the broadcast of the show's fifth and sixth series. The magazine was a mixture of news, reviews, interviews, competitions and, most importantly, comic strips. The comics for the most part depicted original adventures of the crew. However, early on, they also adapted The End and Future Echoes. Back up strips were also included focusing on side characters such as Ace Rimmer, Mr. Fibble and Jake Bullet. The comic strips are notable as amongst the few officially licensed Red Dwarf media written without the involvement of Rob Grant or Doug Naylor.

The comic strip contains examples of: